What Does the future hold for MDEX after the Halving?

On June 5, MDEX officially started its first halving. What changes will the halving bring? And what does it mean for MDX holders?

Before answering these questions, we can take a look at a typical example of cryptocurrency halving.

In 2012, Bitcoin halved for the first time, and its price skyrocketed over 84 times afterward; in 2016, Bitcoin halved for the second time, and rose 29 times afterward; Bitcoin’s most recent halving occurred in 2020, and the price peaked near $65,000 after that, which was also over 7 times higher than the $8,700 at the time of the halving. Investors have reached the consensus that havling means skyrocketing prices. Based on bitcoin’s halving history, we can try to predict how MDX will perform after halving.

MDEX adopts a “double mining mechanism” that combines liquidity mining and transaction mining. The advantage of this approach is that it can attract users to actively participate in transactions at the early stage of the project launch and thereby empower the platform with funds and traffic. However, there is also this problem that its token MDX has been facing increasing selling pressure in the secondary market, which is one of the reasons why the price of MDX’s tokens has been sluggish. The most direct effect of this halving is to reduce the selling pressure, making it easier to push up prices. In addition, it will also stimulate demand for MDX purchases.

Similarly, in the early days, Bitcoin production was high and mining difficulty was low, so users could easily obtain a large amount of Bitcoin, resulting in low purchase demand and low price. However, with the halving of Bitcoin, its production decreased, and the rising hash kept pushing up the mining difficulty, making it difficult for users to obtain more Bitcoin from mining. Users then started to choose to buy directly from the secondary market, thus driving up the price of bitcoin.

By the same token, on the one hand, with the halving of MDX, when the accelerated release period of MDX is over, it will become more and more difficult for users to obtain MDX through mining. While on the other hand, the IMO and community governance scenarios of MDEX will continue to expand the application scenarios of MDX. Users will have to buy MDX from the secondary market if they want to participate in MDEX activities, which also gives MDX another potential upward momentum.

The halving of MDX is based on the same logic as Bitcoin, but with a higher frequency– once every six months. Its daily production is reduced by half after each halving. In this way, in the first quarter of 2023 year, basically 80% of MDX will be mined out; with the reduction of production, the growth rate of MDX circulation will further decrease. The official MDEX repurchase and burn mechanism as well as the enhancement of community consensus, MDX will enter a new round of upward price change.

In addition to the halving, MDEX also uses other intrinsic mechanisms to drive up the value of MDX.

According to relevant rules, MDEX injects 30% of the daily platform revenue into the pending repurchase pool and automatically executes repurchase and burn when the smart contract is triggered by the repurchase price (72-hour MDX average price). From MDEX’s official website, MDEX has burned more than 6.4 million MDX on BSC and more than 42 million MDX on HECO, and the total repurchase amount is over $115 million according to the latest price of MDX. 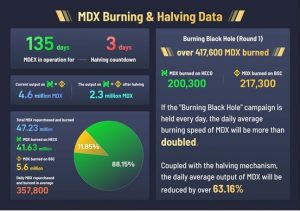 MDEX’s “Burning Black Hole” campaign is another supplementary mechanism to accelerate the MDX deflation and further empower the value of MDX. In the Burning Black Hole campaign, MDEX will set aside 300,000 USDT per round to build a burning prize pool, and the rest pool is investments from MDEX users. There are three prizes set up in the campaign, the first prize Jupiler rewards users with 10% MDX from the prize pool; the second prize Saturn rewards users with 100,000 USDT, and the remaining users will share the 200,000 USDT remaining MDX in the prize pool. 90% of the MDX invested by users in the campaign will be burned.

As there are more transactions on MDEX, the transaction fee may also continue to increase, which means an increased number of MDXs will be burned; according to the data on MDEX’s official website, the first round of the Burning Black Hole capaign has burned a total of over 400,000 MDXs. If the campagin took place on a daily basis, the average daily MDX burn would be doubled. Along with the regular repurchase and burn mechanism. it will enable MDX to enter the deflationary stage in advance. That is, the daily MDX output wil be less than the daily MDX burned. This deflation will in turn increase the speed of MDX appreciation.

A horizontal comparison with DEXs

Let us now horizontally compare MDEX with other mainstream DEX:

From the table, it can be seen that, at present, the lock-up volume of MDEX is about 1/2 of Pancake, 2/3 of Uniswap, and basically at the same level as Sushiswap. But its average daily transaction volume of $2.5 billion is far ahead of the other three DEXs, and even higher than their sum. However, in terms of the market cap of MDX in circulation, it is only 1/11 of UNI and less than 1/2 of CAKE. Therefore, if the valuation logic is similar, then MDEX is just beginning to discover its value.

The above comparison of mainstream DEX shows that, in terms of total liquidity, MDEX is still somewhat lagging behind the current DEX leaders. But considering that MDEX has been online for the shortest time, its growth history is not comparable to Uniswap that has been in the DEX mark for years, or to Sushiswap and Pancake that have experienced DeFi hot and a bull market. In this sense, MDEX’s achievements in lockup volume and market capitalization are worth celebrating.

The highlight of MDEX is its transaction volume. With the support of transaction mining, its daily transaction volume has been far ahead of other head DEXs, and its growth is even more breathtaking. With the help of the upcoming halving, MDEX will give full play to the virtuous cycle of the repurchase and burn mechanism and dual-mining mechanism, which will bring MDEX a much broader future.

From the development history of DEX, it took Uniswap 840 days to increase the cumulative transaction volume from 0 to 100 billion, while MDEX accomplished the same result in just 50 days. If MDEX continues its current momentum, it will maintain a steady growth in locked positions with the development of the DeFi market, and enhance its transaction volume with the help of the dual-mining mechanism. The existence of repurchase and burn mechanism and the forthcoming having will further empower MDEX to secure a unique place in leading exchanges. Correspondingly, the value of its token MDX is still estimated to have the potential of more than several times of growth.

EGW Capital is the reputed name in the space of Blockchain investment banking and the wealth management space. The company has raised over $600...
Read more

With a tweet he announced: "Ready to invest in #SouthAfrica, ready #economic and #social projects. From tourism to export & #free distribution of protective materials such...
Read more
Load more